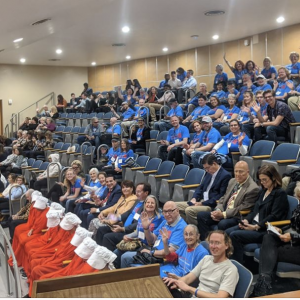 The AZ Legislature has a long history of discrimination against atheist legislators, who have been repeatedly hazed, harassed, and belittled for opening legislative sessions with secular invocations.

It happened again this week, at our annual Secular Day at the Capitol. Senate President Karen Fann’s Office confirmed that Sen Juan Mendez would give the opening invocation that day, in order to represent the growing number of Arizonans who don’t believe in God. She broke her word and gave the invocation to Senator Mesnard, who gave a (conveniently ready-to-go) Christian prayer.

This action symbolically slapped Sen Mendez and AZ atheists, dozens of whom were in the gallery that day, in the face.

We’re tired of this disrespect toward nonbelieving Arizonans. We’re also tired of the controversy that surrounds public prayer and the petty theatrics it seems to attract.

Arizona can do better.

We’re calling upon Senate President Fann to stop the religious bigotry and end invocations in the Arizona Senate.

Please sign our petition to end invocations in the AZ Senate. 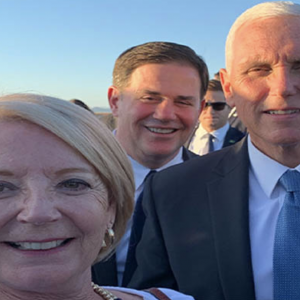 Whereas: All Arizonans have the constitutional right to a secular government and equal protection of the law regardless of their faith or lack thereof, guaranteed by the First Amendment to the U.S. Constitution and Article 2, Section 12 of the Arizona State Constitution. And,

Whereas: The Arizona Legislature has a long history of discrimination against atheist legislators, including Senator Juan Mendez, who has been repeatedly hazed, harassed, and belittled for opening legislative sessions with secular prayers. And,

Whereas: Karen Fann’s Office confirmed that Senator Mendez would give the opening invocation on the Secular Day at the Capitol in order to represent the growing number of Arizonans who don’t believe in God. Then,

Whereas: Karen Fann broke her word and gave the invocation to Senator Mesnard, who previously in his capacity as Speaker of the House ruled atheist Representative Athena Salman out of order for her secular invocation. And,

Whereas: This action symbolically slapped Senator Mendez and atheists across the state, dozens of whom were in the gallery, in the face.

Therefore: I urge you to join the Secular Coalition for Arizona in signing our Demand Letter to Senate President Karen Fann to stop the religious bigotry and end invocations in the Arizona Senate.

I am reaching out on behalf of the Secular Coalition for Arizona in support of my Senator, the honorable Juan Mendez, and his application, submitted weeks in advance, to give the opening invocation on February 24, 2020. This date was not chosen casually, nor was the request, made repeatedly in the weeks leading up to the day, a random exercise of Senator Mendez’ right to open the Senate with an invocation. Monday, February 24th was the Secular Coalition for Arizona’s seventh annual Secular Day at the Capitol, in which nonbelieving and interfaith constituents traveled from across the state and from as far away as Kingman to hear the Senator’s invocation.

You can imagine our surprise when, in spite of being on the schedule, Senator Mendez was snubbed at the last moment and the invocation was instead explicitly Christian. If this is, in fact, just a scheduling mistake, then the failure speaks volumes about the Senate President’s priorities, competence, and ability to represent the diverse people and beliefs of Arizona.

If it was not an accident, then we are due for a very different conversation.

The long pattern of discrimination, hazing, and outright exclusion of voices outside the Christian faith speaks to the Legislature’s systemic discrimination against nonbelieving members. The very Senator called upon, and obviously prepared in advance, to give an explicitly Christian prayer instead of Senator Mendez, is the same former Representative who ruled Representative Salman out of order for giving a secular invocation three years before.

State-sponsored prayer inherently leads to polarizing debate. It inherently makes public servants the arbiters of whose faith is represented and whose is ignored. As long as the Senate opens with prayer, the least we can ask is that all perspectives be given a voice. The Constitution, in fact, requires that a government body opening with prayer must include all perspectives and cannot require a reference to a higher power. Town of Greece v. Galloway, 572 U.S. 565 (2014). When public bodies open with prayer, they cannot discriminate based on the views of the person praying. Williamson v. Brevard County, No. 17-15769 (11th Cir. 2019).

February 24 was the the Secular Day at the Capitol, with or without your support. Hundreds of Humanists, atheists, and interfaith allies gathered on the Capitol grounds to speak to our legislators. We support our Constitution and its guarantee of a wall of separation between religion and government. We organize at the local level and maintain dialogue with our legislators throughout the session. You missed your opportunity, Senator, to give Arizona’s growing secular voting bloc the pretense of representation. Now, you have the chance to make it right with meaningful change.

On behalf of the Secular Coalition for Arizona, I must implore you to stop this polarizing circus of invocation discrimination and end invocations at the Arizona State Senate.