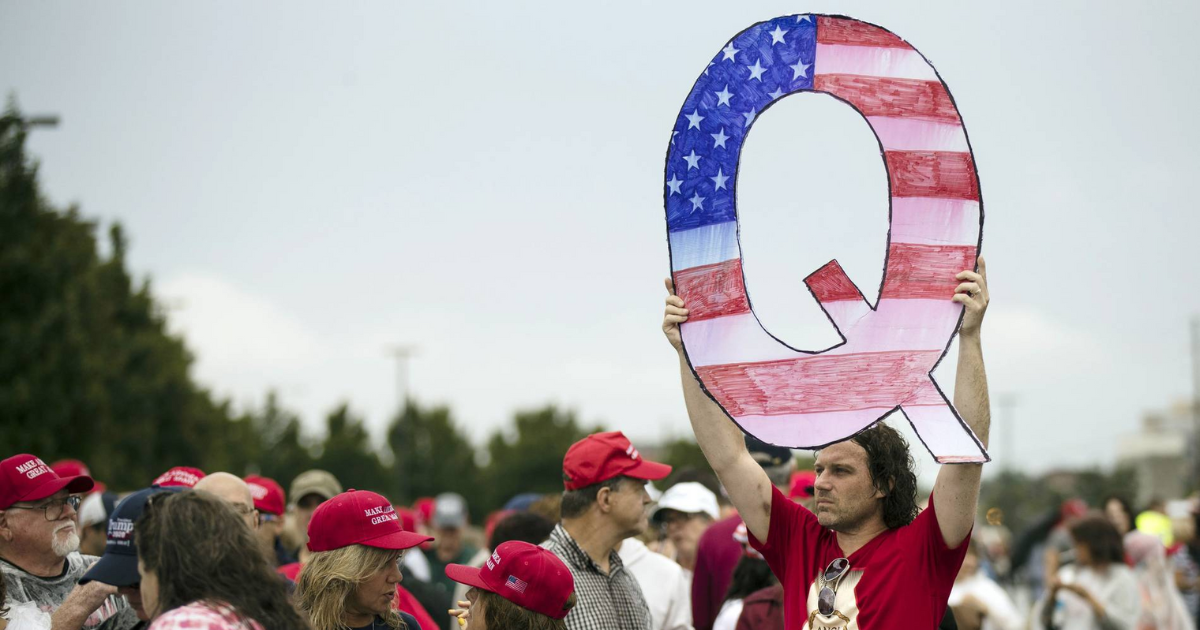 Secular AZ recently sat down with Dr. Mia Bloom, author of Pastels and Pedophiles: Inside the Mind of QAnon to talk conspiracy theories in Christian socio-political movements. (Watch the full talk here.)

The conversation illuminated not-always-obvious connections between conspiracy theory culture and religious belief—as well as racism, mental illness, and more. Her conclusions illustrated that separating church and state is becoming an increasingly intersectional issue.

Here are top takeaways from the talk:

Dr. Bloom believes that fascination with conspiracy theory is linked to white evangelical preoccupation with apocolypse prophecy—that church members are vulnerable to QAnon because they see modern turbulence as a sign of the end times.

“As people are confronted with rapidly changing sociopolitical contexts, this end of time, apocalypticism, and messianism [have] been infusing, evangelical politics, and culture,” says Dr. Bloom. “What this means is that people who are feeling disconnected become more vulnerable to conspiracy theories and they find them to offer some sort of succor and make them feel better.”

Dr. Bloom sees a link between the decline in white evangelicalism, conspiracy theories, and the sect’s large presence in right-wing movements.

“The next generation is not upholding the same level of religiosity as their parents. We are seeing a growing—if not atheism, then agnosticism. And what QAnon, and many of these conspiracies do is they almost reanimate evangelical belief.”

“You cannot understand the spread of QAnon among evangelicals without understanding its role in the pandemic,” says Bloom.

She points to the summer 2020 hashtag campaign “#SaveTheChildren,” which disseminated claims that Democrats, celebrities, and members of the Royal Family are trafficking children and drinking their blood—and that former President Trump had a secret plan to bring the group to justice.

“It’s because of the lockdowns and because people were spending so much more time online and isolated in their homes that there’s this really turbulent mix of loneliness, isolationism, and the susceptibility to conspiracy theories,” she says, “as well as the fact that for some people, a once-in-a-hundred year pandemic might have looked like it was bringing the end of times prophecies to reality.”

Dr. Bloom provided stats showing QAnon activity starting on Facebook October 2017, and that its popularity was relatively flat until March 2020 when lockdowns began. After that, she pointed to a 600% increase in QAnon content being shared, posted, and consumed.

She also says that while many evangelical pastors perhaps don’t subscribe to the more absurd elements of the theory, it quickly became very difficult to preach against it.

“During the pandemic many of these pastors would say ‘we get these parishioners once a week, for maybe an hour or two, whereas the internet and social media is getting them for 10 to 12 hours a day.’”

Bloom says part of QAnon’s spread can be chalked up to an imbalance between the amount of content available online and a shortage of community due to COVID-19 lockdown restrictions.

Surveys performed by conservative think tank American Enterprises Institute as well as the Institute for the Study of Religion show that about 1 in 5 Americans agree with the core tenants of QAnon: that there is a “storm” coming that will sweep away nebulously-defined elites in power and restore “rightful” leaders.

A smaller but still alarming percentage—15% of Americans—subscribe to the specifics: that these “elites” are Satan-worshipping pedophiles running a global sex trafficking operation.

After the January 6th coup attempt, 15% of Americans (largely Republican) agreed with the statement that Donald Trump has been secretly fighting a group of child sex traffickers including Democrats and Hollywood elites. 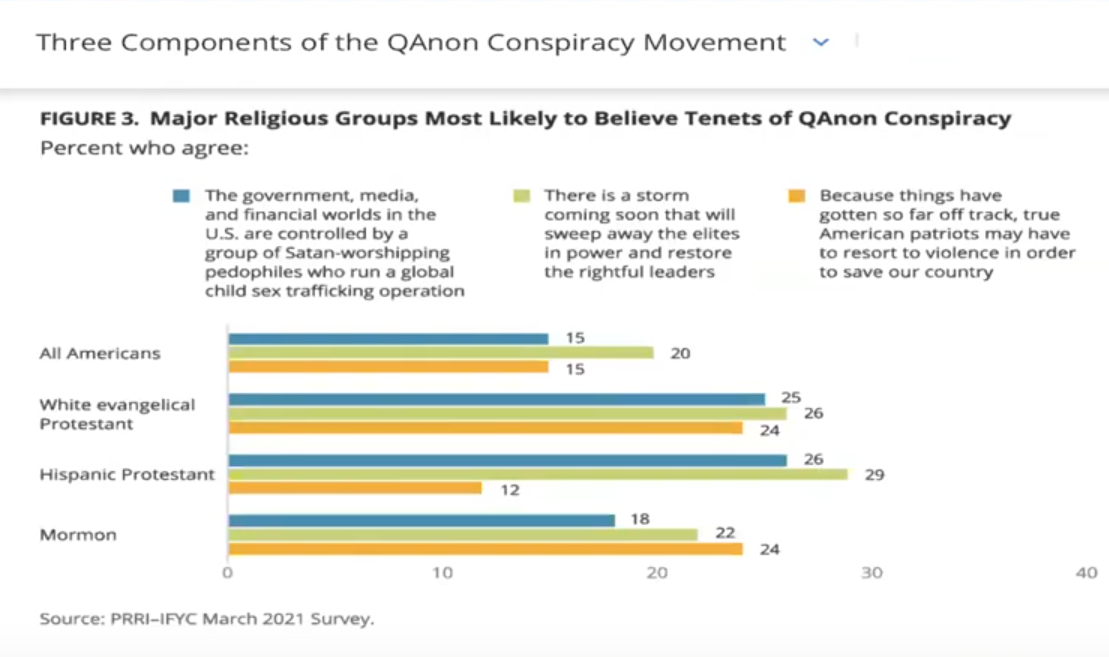 A survey published by PRRI (above) shows the religious breakdown of these beliefs, with white evangelical Protestants most in favor of resorting to violence to “save” the country. Hispanic Protestants and Mormons ranked comparably in agreeing with the other statements 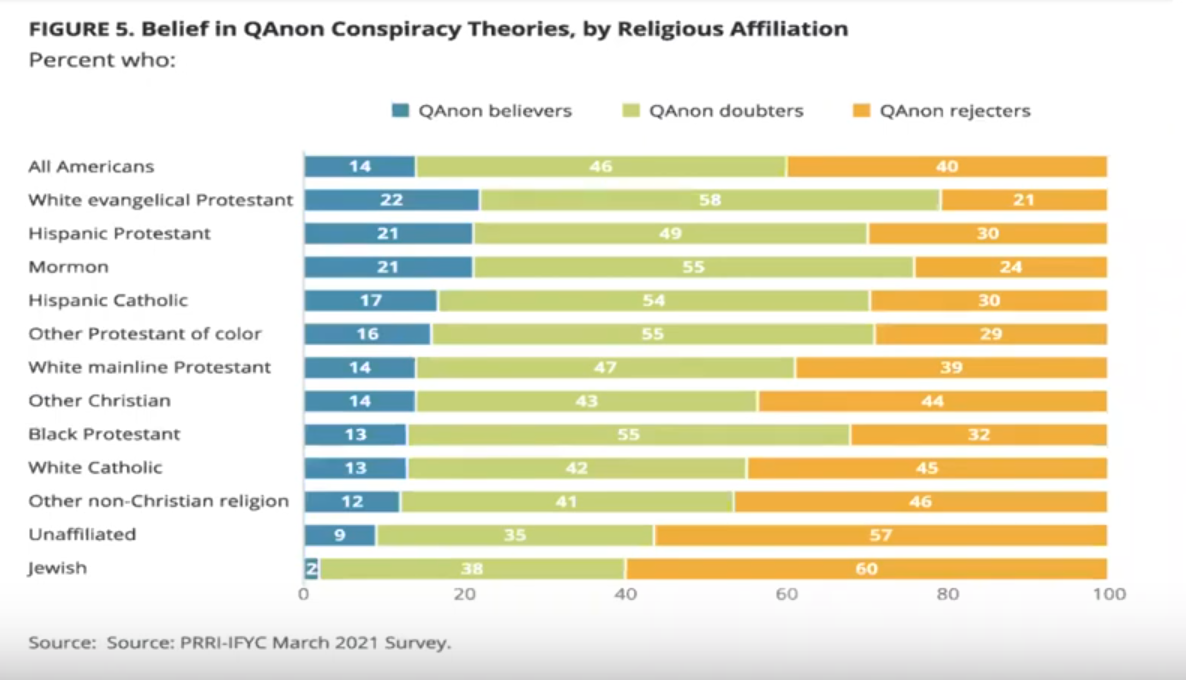 Groups least amount to subscribe to QAnon belief were Jews and Muslims.

Dr. Bloom believes it’s important to understand the overlap between QAnon, anti-maskers, anti-vaxxers, Stop the Steal, and other right wing movements. She says there is an uptick of QAnon among right wing extremists.

“Research has found that people tend to believe not just in one conspiracy theory, but they tend to accumulate them,” says Bloom. “It’s sort of like a bag of chips. You don’t just have one.”

She says those that believe in QAnon are likely to believe in other theories such as that 9/11 was an inside job or that the moon landing was fake.

Multiple forms of prejudice are part of the equation

Many QAnon supporters stormed the US Capitol on January 6th—illustrating the intersection of conspiracy theory and multiple forms of hate and prejudice.

Dr. Bloom pointed out that the basic tropes and myths of QAnon—such as that Jews control the media—are recycled content from antisemitic propaganda like the Protocols of the Elders of Zion, the counterfeit pamphlet published by the Russian Secret Police in 1933.

Dr. Bloom also studied QAnon handouts and memes about child trafficking and caught a telling theme in the imagery: that despite the vast majority of the world’s trafficked children being brown, Black, and Asian, QAnon propaganda disproportionately features white children as the victims—often of Black or brown abusers.

According to Dr. Bloom, this has to do with anti-Black tropes that stared in the reconstruction era.

“There were these images, after the Civil War, that the Black man was coming for your white women, and this is something that was used in the summer of ‘22 to target Republican women voters,” she says. “And I will tell you that in Arizona it has been very effective at getting white Republican suburban women back to the Republican party, because in 2018, either they didn’t show up at the polls, or they may have voted for someone else.”

Bloom also caught images attached to the #SaveTheChildren campaign like the one below, pushing an imagined link between homosexuality and pedophilia.

Dr. Bloom thinks that people—especially older people—become a bit “discombobulated” when beliefs they’ve long held such as gender duality are challenged. She thinks that combines with frustration over scandals such as child abuse in the Catholic church to make people more willing to believe in conspiracies. Those theories, she says, offer an alternative explanation for beguiling problems that makes them feel better.

“What happens as a result of the belief in these conspiracy theories is that actually people feel better. They start to experience pride. They feel a sense of belonging in this new online community. They might be feeling a collective outrage, but they feel fulfilled because they have figured out something that other people have not.”

She concluded her presentation by pointing out the underlying issues:

“It’s about loneliness. It’s about the uptick of mental illnesses a result of the lockdowns in the pandemic. It’s about the fact that we have a lot of questions, and we have platforms like Twitter now, and other platforms that are disseminating disinformation and misinformation… including by the owner of Twitter who has 131 million followers.”

Dr. Mia Bloom is an international security fellow at New America and Professor of Communication in Middle East, studies at Georgia, State University in Atlanta, Bloom is one of the World’s Leading Experts on Violence and Extremism and Conducts Research in Europe the Middle East and South Asia, She’s the Author of 6 Books and over 80 articles on Violent Extremism. Her next Book Veiled Threats Women in Jihad is expected in 2023.