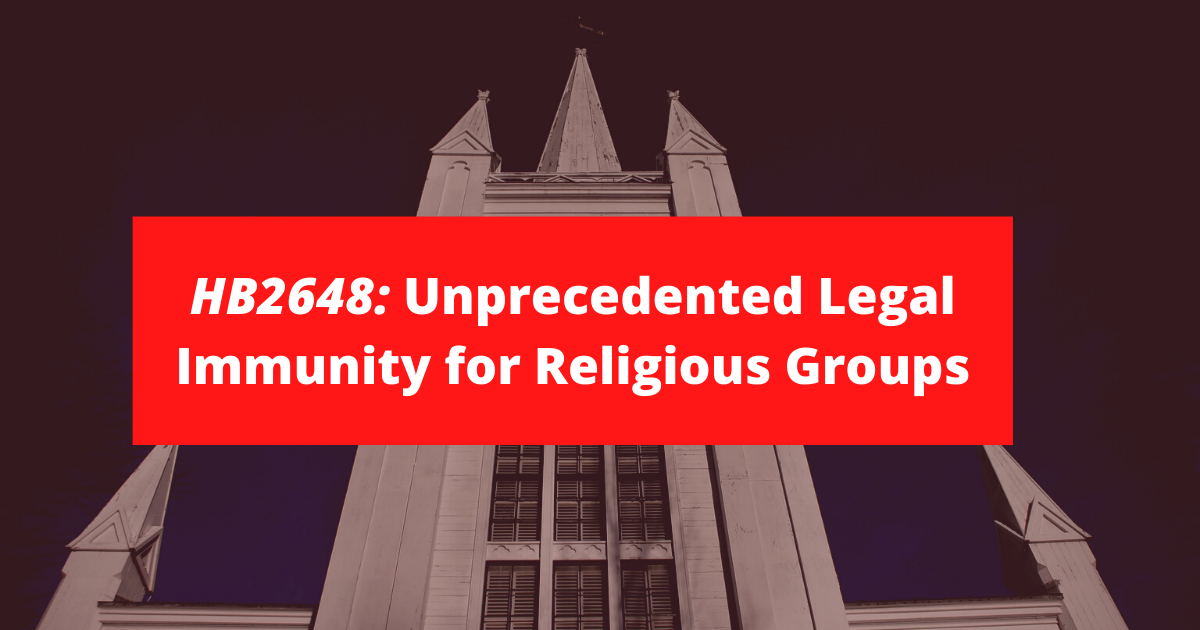 HB2648 is the single most dangerous piece of Christian nationalist legislation introduced at in years. (Click here to read the bill’s text.)

Proponents of HB 2648 claim that the bill merely protects the right to worship during public emergencies. But the bill is much more extreme. Whether intentionally or unintentionally, this bill is a wolf in sheep’s clothing. As written, it would essentially give religious organizations a “get out of jail free” card for nearly any violation of any law at any time. No state has ever adopted an exemptions law this radical, for good reason: It would be dangerous and blatantly unconstitutional.

Giving Religious Groups Blanket Immunity from the Law Harms Others

The broad exemptions in HB 2648 would allow religious organizations to engage in behavior that harms others with total impunity. For example:

• Religious schools and organizations could claim immunity from criminal or civil liability for child abuse.
• A religiously motivated hate group could avoid prosecution for criminal activities associated with its religious beliefs.
• Religious organizations of all types could be shielded from state and municipal nondiscrimination laws.
• A house of worship that routinely violates the fire code or exceeds capacity limits during worship services could not be fined or required by a court to comply with the law.
• A patient would lose the right to sue a religious hospital for medical neglect or reckless care provided consistent with the hospital’s religious beliefs.
• A family whose child was injured or killed due to negligence or recklessness by a religious school could be prevented from suing the school.
• Arizona could not recover state funds used by religious organizations for fraudulent or improper purposes, as long as the funds were used while engaging in religious activities.
• Employees of religious schools and hospitals could be prevented from suing if their employers engaged in harassment, discrimination, or even criminal behavior.
• Individuals and groups are less likely to contract with religious organizations (e.g., to host weddings, events, or even provide insurance) if they cannot enforce their rights in court.

HB 2648 is not only dangerous. It is unnecessary. Current Arizona law already protects religious freedom, even in times of crisis. For example, the Arizona Religious Freedom Restoration Act provides that the “government shall not substantially burden a person’s exercise of religion” unless the government can meet a very high legal standard.
HB 2648 is also much more extreme than the U.S. Supreme Court’s recent rulings, which already protect worship services during times of crisis. The Court has made clear that government may not impose emergency restrictions on worship services that are more severe than restrictions imposed on comparable secular gatherings. HB 2648 would go far beyond this common-sense rule to prevent the government from imposing any restriction or liability on a religious organization at any time. Even if the religious organization directly endangers the lives of the public or the members of the organization itself, the government’s hands would be tied.

This bill has passed the State House and Senate Government Committee. It likely will proceed to the Senate floor.

What can you do?