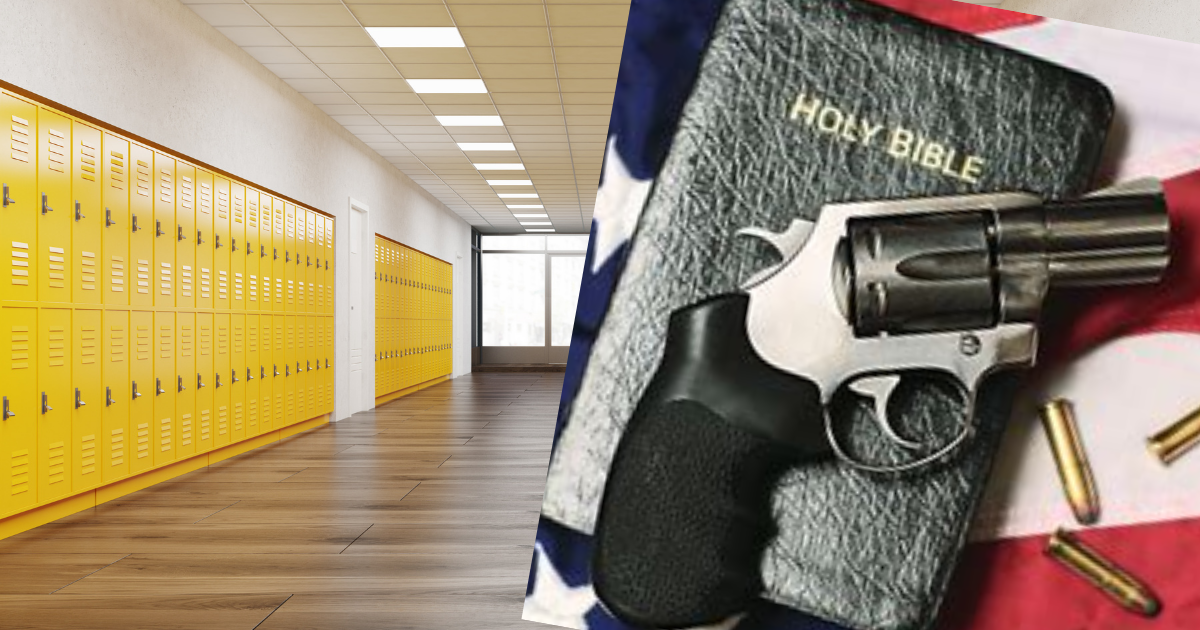 Arizona State Senator Rick Gray embarrassed himself and the state of Arizona on May 25, 2022 by claiming that forced religion would be the solution to mass shootings.

Even a cursory review of the Old Testament will show that the deity that Senator Gray claims would prevent mass killings is one of the greatest mass murders in all of literature. He killed a million Ethiopians and half a million Israelites after destroying every human on earth but eight, reducing entire cities to rubble, and ordering genocide and rape.  (For more, see “God: The Most Unpleasant Character in All Fiction“)

In an opinion piece on May 27, 2022, political writer Steve Benen points out the lack of logic in claiming we cannot ask politicians to solve gun violence, but we can ask them to tell us what our spiritual beliefs should be. While Gray and his ilk claim America has problems because of lack of religion, the facts are completely the opposite.

Religion Does Not Lead to a Safe, Crime-Free Society

America is easily the most religious among the wealthy democracies; weekly church attendance is higher than Europe. If religion brought safety and a crime free country, America should be the safest.

Rather, we are the only country where these kinds of mass shootings occur on a frequent basis. As the Washington Post’s Paul Waldman put it, “[If] the United States is simultaneously the most religious wealthy country and the most violent, a lack of religion clearly isn’t our problem.” 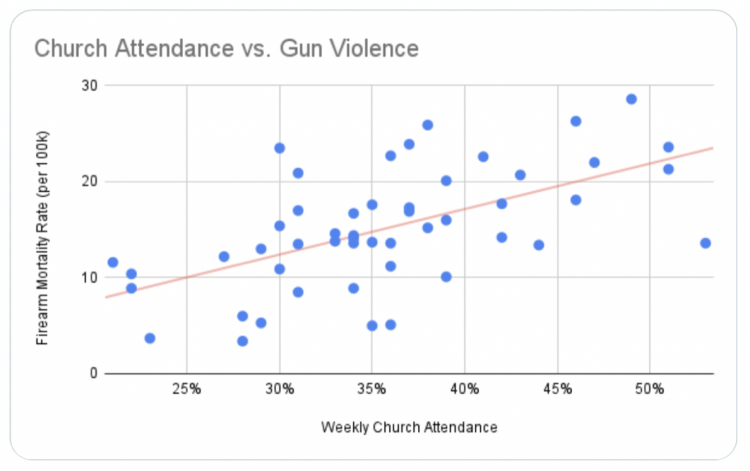 A quick fact check of Senator Gray’s remarks shows that societies with less religion have less violence. Murder rates, like most violent crime rates, are lower in more secular nations and more secular states in the U.S. such as Vermont and Oregon compared to more religious states like Louisiana and Alabama. The safest cities in the world are nearly all in nonreligious countries and the eight that are in the U.S. are in the least religious regions.

Nearly every measure of health or well-being finds that less religious countries score better. That includes supportive family and youth systems, honest government, non-discrimination, protection of political and civil liberties, peace, and prosperity with a high quality of life.

On the flip side, the negative trend is very evident in the U.S. Here, the most religious states are the same ones with the most poverty, ill-health, infant mortality, venereal disease, teen pregnancy, and low rates of education.

In 1962, the Supreme Court ruled in Engel v. Vitale that school-sponsored prayers in public school violate the First Amendment. That ruling did not remove God from the schools, but mandated that children pray privately (as does the Bible) or on their own time, and prohibited forcing those of one religion to accept the tenants of another – exactly what Gray and his cohorts are seeking to do. No spike in school shootings occurred after that decision.

The spike occurred after the assault weapons ban was lifted in 2004. Mass shootings began to climb until 2006, when they dropped to their lowest level in 2010 under President Barrack Obama. Rates began to rise in 2013 with a steep jump in 2018 under Donald Trump and then shot up dramatically in 2020. 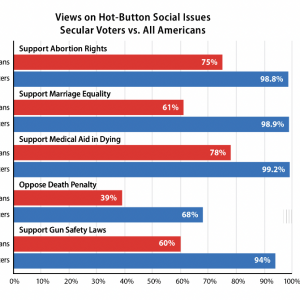 Embracing religion does not cure the ills of society but can in fact be counterproductive. The nonreligious support gun safety and the protection of children and the public in high numbers.

Thus arguments focused on safety, or the lives of children, do not budge the Christian nationalists who believe their God is telling them they have a right to have any gun they want – though guns didn’t even exist until centuries after the Bible.

Regardless of political party, if a person embraced Christian nationalism, they were more likely to oppose gun control. The authors pointed out that some Christian nationalists perceive guns as a sacred God-given right put into the constitution by God.

Apparently, the infallible God made a mistake in the original Constitution and forgot to include those rights, so had to sandwich them in the second amendment of the later attached Bill of Rights – after the First Amendment about freedom from and non-establishment of religion. In fact, that amendment was to allow white slave owners to protect themselves from enslaved people who were rebelling.

A qualitative study of gun owners found that while gun owners stress the need to protect, be diligent and defend, they base their beliefs on supernatural evil, rather than facts in the real world.  Samuel Perry — an associate professor of sociology at the University of Oklahoma who has written two books on Christian nationalism — and a colleague surveyed 1,600 Americans in 2020.

They found that while 92% of gun owners support universal background checks, white Americans who think the U.S. is a Christian nation reject the idea. This subset of religious Americans holds gun rights sacred above all other rights, including the right to life, free speech, and even freedom of religion.

Who needs any rights, or any democracy, when you have the barrel of a gun? They believe they need guns to suppress disorder – disorder by people who don’t look like them – the same as the slaveholders.

The question remains whether this mass shooting, and those that have occurred since Uvalde (17 as of June 2, 2022) will have any impact on gun policy. We see this cycle over and over – a shooting, public uproar, politician foot-dragging, news cycle moves on, issue is forgotten until the next shooting, public uproar …  rinse and repeat.

One study found that the shootings have a strong impact, but it only lasts a week. The time for political action is short. That is what the opponents count on as they waffle and wheedle, as they lie and blame others as Senator Gray did, as they call for “thoughts and prayers” rather than action to stop children from murder. Inaction and transfer of blame to an imaginary being or a minority belief system is a complete abdication of political responsibility and an absence of human values.