The claim that this nation was founded on Christianity directly contradicts the Constitution and more than 200 years of history.  The First Amendment says: “Congress shall make no law respecting an establishment of religion, or prohibiting the free exercise thereof;…”

They shall not establish a religion and they shall not prohibit citizens from exercising their own religions – whatever they may be. At that time, some colonies did have established religions and even taxed all citizens to support them. If someone didn’t like that religion, they could be imprisoned, tortured or killed. A period of disestablishment followed.

“No Man Shall Be Compelled”

Jefferson’s proudest claim was the Virginia Statute for Religious Liberty that he and James Madison passed to end Virginia’s established church.  The statute says: 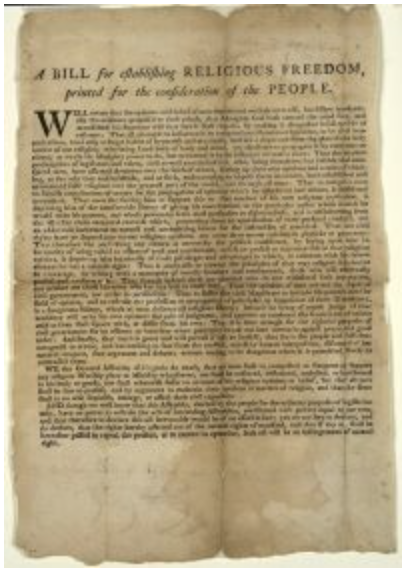 We the General Assembly of Virginia do enact that no man shall be compelled to frequent or support any religious worship, place, or ministry whatsoever, nor shall be enforced, restrained, molested, or burthened in his body or goods, nor shall otherwise suffer, on account of his religious opinions or belief; but that all men shall be free to profess, and by argument to maintain, their opinions in matters of religion, and that the same shall in no wise diminish, enlarge, or affect their civil capacities.

The United States was deliberately founded so as not to be reliant on or connected to any religion.  The founders all had experience in or knowledge of countries where religious differences had torn them apart, some for hundreds of years, over doctrinal disputes.  Various religions already existed in the colonies and to weld all that into one country would not only take some skillful doing, but require that religion could not be the weapon that tore it all apart.

The founders themselves were religious but they had seen that the mixture of government and religion — both in the old country and the new — resulted in oppression and tyranny.

An America Where Separation of Church and State is Absolute

The Constitution contains no mention of religion except in Article VI that prohibits any religious test for public office. The founders did not want a government that could exclude people based on religion. Many of those who fought for this provision were clergy because they understood, as did James Madison, that mixing faith and government weakens both.

I’m old enough to remember the uproar over John F. Kennedy being a Catholic. The rumor mill ran wild with fears that if Kennedy won, the Pope would be running the county. In response, Kennedy said: 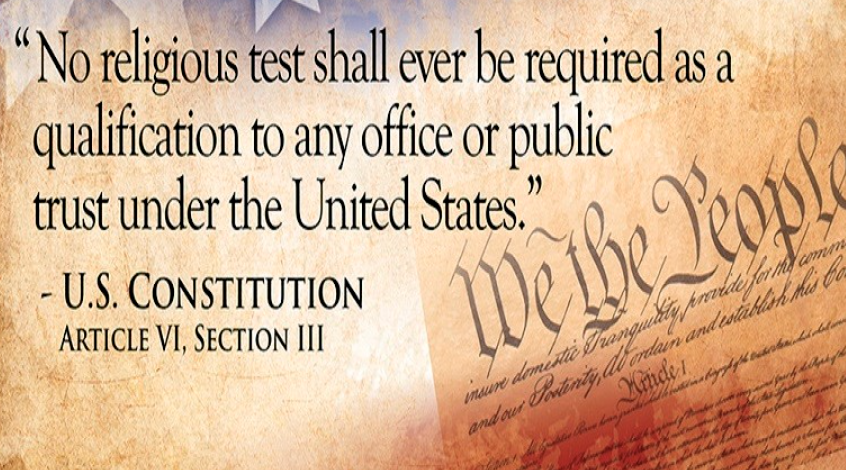 “I believe in an America where the separation of church and state is absolute – where no Catholic prelate would tell the President (should he be Catholic) how to act, and no Protestant minister would tell his parishioners for whom to vote – where no church or church school is granted any public funds or political preference – and where no man is denied public office merely because his religion differs from the president who might appoint him or the people who might elect him.

I believe in an America that is officially neither Catholic, Protestant nor Jewish – where no public official either requests or accepts instructions on public policy from the Pope, the National Council of Churches or any other ecclesiastical source – where no religious body seeks to impose its will directly or indirectly upon the general populace or the public acts of its officials – and where religious liberty is so indivisible that an act against one church is treated as an act against all.”

Kennedy was elected and none of the hysterical claims became reality in his term. But today, it appears many politicians accept instruction on public policy from their church and even brag about it in violation of Article VI. We have seen several examples in Arizona with a church in Mesa holding a voter registration program for supporters of the current president and a church in Cave Creek hosting a campaign speech – both in violation of the law. IRS complaints were filed about both.

America is special not because we are a chosen people, but because we did not organize a government based on religion. The countries that are based on religion – Iran, Saudi Arabia, Pakistan to name a few – are notorious for their violations of human rights, violence toward women, and silencing of those who disagree.

Attorney and historian Andrew Seidel in The Founding Myth:  Why Christian Nationalism is Un-American, lays out a brilliant argument on why the efforts of Christian nationalists to destroy the “wall of separation” between church and state is in fact traitorous. Only the separation of church and state maintains religious freedom for us all.