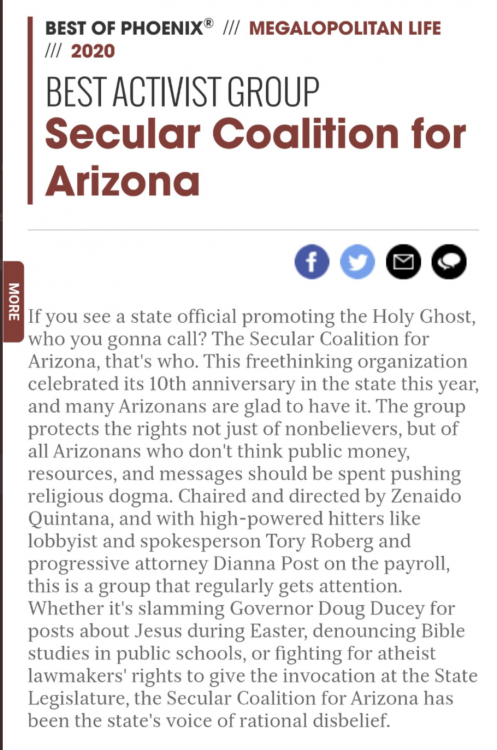 “If you see a state official promoting the Holy Ghost, who you gonna call? The Secular Coalition for Arizona, that’s who. This freethinking organization celebrated its 10th anniversary in the state this year, and many Arizonans are glad to have it. The group protects the rights not just of nonbelievers, but of all Arizonans who don’t think public money, resources, and messages should be spent pushing religious dogma.

Chaired and directed by Zenaido Quintana, and with high-powered hitters like lobbyist and spokesperson Tory Roberg and progressive attorney Dianne Post on the payroll, this is a group that regularly gets attention. Whether it’s slamming Governor Doug Ducey for posts about Jesus during Easter, denouncing Bible studies in public schools, or fighting for atheist lawmakers’ rights to give the invocation at the State Legislature, the Secular Coalition for Arizona has been the state’s voice of rational disbelief.”

Thank you, Phoenix New Times! We’re honored – and it’s all thanks to the Secular AZ Board, Members, Supporters, Donors and Staff who fight for the (constitutional) separation of church and state every day!