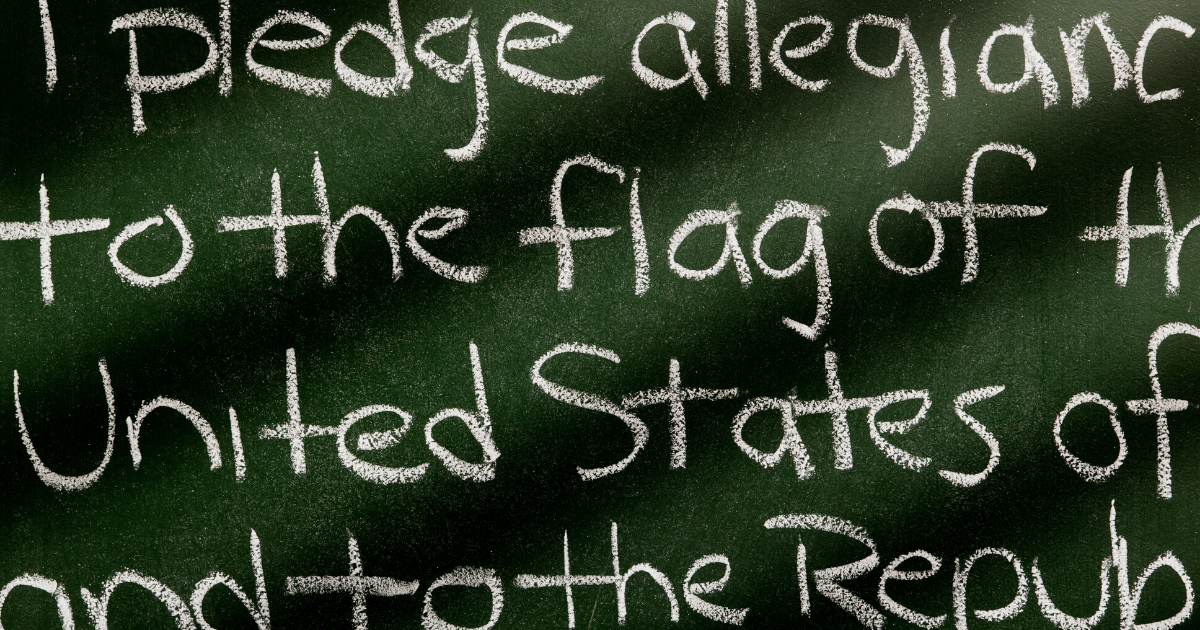 State lawmakers worked hard this session to figure out ways to impose groupthink on students. Representative Fillmore from the far east valley and Pinal county introduced HB2060, requiring school children in grades 1-4 to recite the Pledge every morning. Under current law, they may if they like; under Fillmore’s bill — which thankfully died in committee — they would have been required to do so unless their parents wrote an excuse.

Today’s version of the Pledge is credited to Francis Bellamy in 1892. Bellamy’s version did not include the phrase “under God”, even though he was a Baptist minister and Christian socialist. The language of the Pledge has been changed several times since Bellamy’s version. In 1923, the words“my flag” were changed to “the Flag of the United States” so that immigrants knew it meant their new flag, not their old one. The words “of America” were added in 1924. That new version was recognized by Congress in 1942.

The words “under God” were not added until 1954 during the Cold War when the U.S. wanted to differentiate itself from godless communist nations. Several previous attempts to add that wording had already failed; it was finally achieved by a joint resolution of Congress. However, some historians argue that in fact it was not the fear of communists that motivated the addition of “under God” but the desire to conflate Christianity and capitalism as a challenge to President Franklin D. Roosevelt’s New Deal. The “prosperity gospel” of today continues this conflation of religion and capitalist excess.

The Pledge was first used in public schools in 1892 in connection with the World’s Fair in Chicago. My friends from other countries are astonished that school children are required to recite such a pledge as they consider it akin to brainwashing. Five states do not require the pledge (CA, HA, IA, VT, and WY) and the U.S. Supreme Court has said that schools may not require students to do so. So Fillmore’s bill was unconstitutional. However, that has not stopped this legislature in the past.

Over the years, many lawsuits have been brought against mandatory recitation of the Pledge and the wording “under God.” Jehovah’s Witnesses brought many of the cases because they consider the pledge to be idolatry and against their religion. In 1943, in West Virginia State Board of Education v. Barnette, the Supreme Court said that public school students cannot be required to say the Pledge and that such ideological dogmata is antithetical to the principles of our country.

The justice concluded with: “If there is any fixed star in our constitutional constellation, it is that no official, high or petty, can prescribe what shall be orthodox in politics, nationalism, religion, or other matters of opinion or force citizens to confess by word or act their faith therein. If there are any circumstances which permit an exception, they do not now occur to us.”

Other objections have been that for a democratic republic built on freedom of dissent, citizens should not be required to speak — as in reciting a pledge — because it violates the First Amendment. Secondly, children who are forced to recite the Pledge are not of an age that they can consent to the speaking. Third, the addition of “under God” in 1954 violates the First Amendment protection against the establishment of religion.

In 2005, a California court ruled that forcing children to say “under God” was an endorsement of monotheism that violated the First Amendment. In 2006, a Florida court ruled that requiring students to stand and pledge violated both the First and Fourteenth amendments. In that case, the student had been ridiculed by the teacher. In 2009, a mother in Maryland sued and won when a teacher berated her child and had her removed from class for refusing to say the Pledge.

Should the existence of actual facts come back into fashion, neither the Pledge of Allegiance nor the saying “under God” had any connection with the founding of the nation.