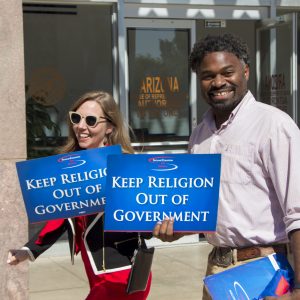 We’ve all been seeing it for a long time. In Arizona, one politician after another misuses faith to justify legislation suppressing reproductive freedom, minority rights, science, and more.

But despite their outsized prominence, these bills do not reflect the true beliefs of most Arizonans—religious and non-religious alike—who broadly support bodily autonomy, civil rights, public education, and who understand that we have a constitutional right to religiously neutral government.

It’s time for a movement that brings people together to rebuild separation of church and state in Arizona as the framers of the constitution intended.

Secular AZ is the only organization in the Grand Canyon State dedicated entirely to this cause. And regardless of your background, party, faith, or lack thereof—you can be part of its future right now.