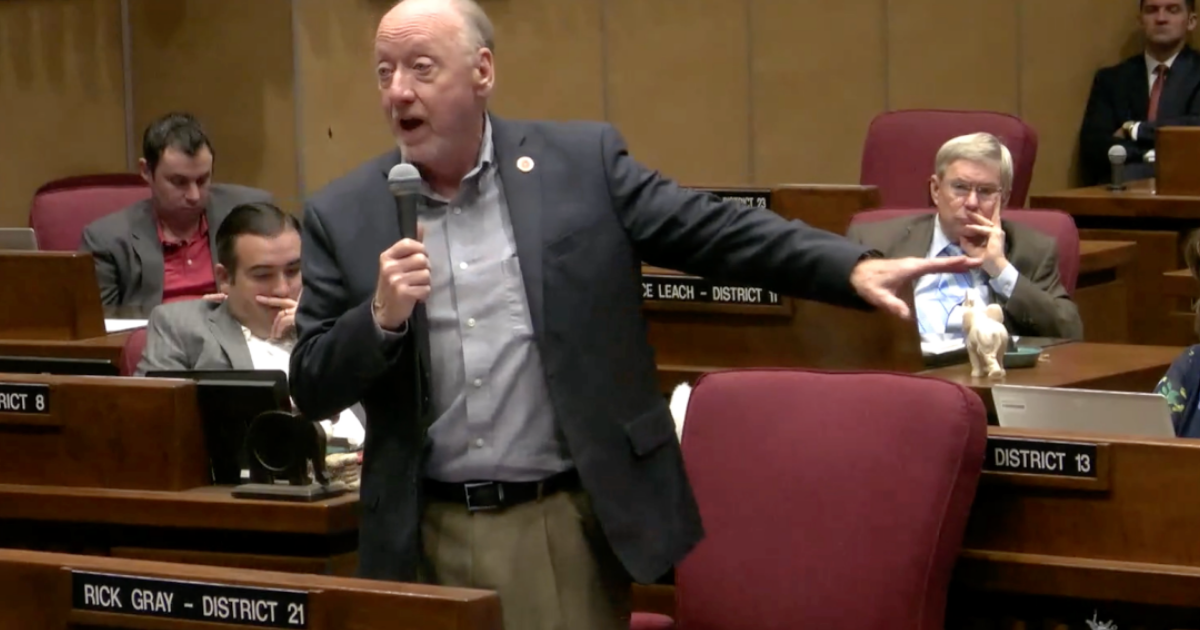 Leaders from Arizona’s nonreligious communities are decrying comments on the floor of the State Senate Wednesday by Senate Majority Leader Rick Gray (R-21), who blamed humanism and atheism for the mass shooting in Uvalde, Texas.

While arguing that Americans’ lack of faith caused the murders of 19 children and two teachers, Senator Gray claimed humanism and atheism were the US’s “state religion,” and that non-“spiritual” solutions to gun violence leave communities with “just a humanistic basis”–leaving kids “lost and empty,” because “all they’ve been taught is they’re animals.”

Jeanne Casteen, Executive Director of Secular Coalition for Arizona (Secular AZ), identifies as a humanist and expounds on what she sees as the harm of stereotyping nonreligious people as characterless.

“This is dangerous rhetoric,” says Casteen. “And it’s quite a leap. As an educator, I’ve sat through many, many active shooter drills and actual incidents on campuses. I’ve gone out to the hallway and grabbed kids who were going to use the restroom, pulled them in, told them to huddle in a corner, ready to put my body in front of them, to protect them from bullets. And he’s saying that this is my fault somehow?”

Casteen says that if such comments were made about any other minority, they’d be condemned as hate speech that could instigate further violence.

“There are nonreligious kids in Senator Gray’s district that are now less safe because of what he’s said,” she continues.

“I’m reading the Indian Boarding School report,” says Post. “Arizona had 47 of these schools. Our government contracted with denominations—Congregational, Presbyterian, Episcopel and Catholic—to ‘Christianize’ Indigenous kids. These schools had chronic health problems. Kids suffered sexual, physical, and mental abuse mostly in church-run schools. The reports refer to Indigenous people as ‘Pagan,’ and ‘wild beasts.’ It sounds like this is the kind of system Senator Gray wants to go back to. And it gives ugly historical context to his calling non-Christian views animalistic.”

Post counters calls for religiosity as a solution to gun violence with emerging data showing that gun deaths are higher in religious states.

“Is this the kind of ‘value’ Gray is proposing?”

In terms of what values humanists hold, Alex Zygmunt, President of the Humanist Society of Greater Phoenix, says “The implication that humanistic ideals are the catalyst to the ails of the world around us is confusing and utterly false.”

Contrary to the Senator’s nihilistic portrayal, humanism is defined by acts of compassion, encouraging service, philanthropy, and congregation. The most updated declaration of humanism’s values, Humanism and Its Aspirations, states “humanism affirms our ability and responsibility to lead ethical lives of personal fulfillment that aspire to the greater good of humanity.”

“To see a State Senator demean and deliberately misrepresent their atheist and humanist constituents is a disgrace to his office and to those people,” says Zygmunt. “This is not representation. This is hatred of the unknown.”

Expounding on what humanism actually teaches children, he points to a series of books by young humanist author Bailey Harris, which encourage a sense of love and community through understanding cosmology, biology and evolution.

When asked for comment, the teen writer offered: “Humanism doesn’t teach us that we are ‘lost and empty.’ It teaches us how to think about the world and each other, using science, reason and compassion. It teaches us to appreciate our shared humanity, and that we are all more alike than different. We only get one life, so we really need to make it count by leaving the world a kinder, more peace-filled place.”