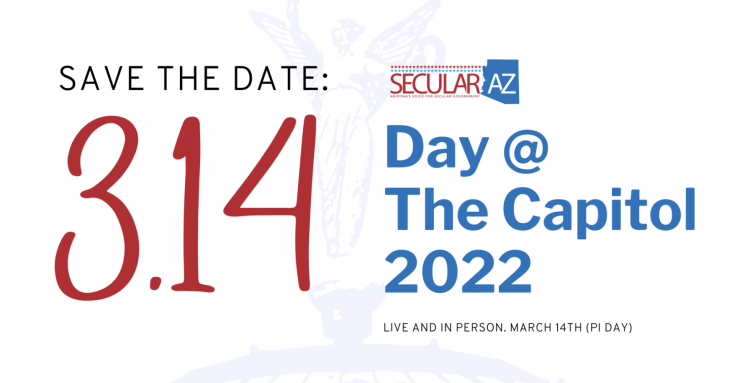 That first year, we had just two weeks to organize the event and ended up with 25 people showing up. This got the attention of our national groups, and by the third year we had nationally-renowned speakers and 150 people.

Ever since, we’ve seen a sea of blue “Secular AZ” shirts on some amazing people hanging out near the House and Senate, showing our elected officials we are powerful together!

So we’re calling ALL who support separation of church and state to join us on Pi Day 2022 (March 14th), for Secular Day at the Capitol. Here’s what you can expect:

This year’s event will be held outdoors in the Rose Garden on the north side of the State Capitol complex, just west of the House building. Proof of vaccination will be required and COVID-19 safety protocols will be in effect.

More specifics to be revealed closer to the day of the event – hope to see you there!

SUPPORT SECULAR DAY: SPONSOR OUR EVENT WITH A DONATION

Thank you for supporting Secular Day! Your funding goes toward bringing quality speakers, providing a delicious lunch from a locally owned small business, and supporting our advocacy and education efforts across the state.