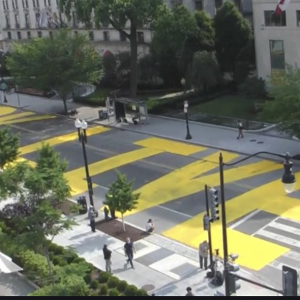 On June 5, 2020, District of Columbia Mayor Muriel Bowser had “Black Lives Matter” painted in block letters two blocks long and the entire width of 16th Street NW in Washington D.C. leading up to the White House, a site of prominence during summer protests in response to the execution of George Floyd at the hands of officers from the Minneapolis Police Department. A group opposing the mural filed suit against the Mayor, seeking to remove the mural from the road. The United States District Court for the District of Columbia promptly threw out the Complaint.

As one could imagine, opposition to the mural arose from many places. Almost immediately, the Washington D.C. Chapter of BLM Global Network posted to their Twitter account about their opinion on the display stating, “[t]his is a performative distraction from real policy changes. Bowser has consistently been on the wrong side of [Black Lives Matter DC] history. This is to appease white liberals while ignoring our demands. Black Lives Matter means defund the police.”

As for the other side of the movement, Pastor Rick Penkoski, Chris Sevier, and Tex Christopher filed a lawsuit against the Mayor of Washington D.C. These three plaintiffs make up the leadership of “Warriors for Christ”, a religious group that is included in the Southern Poverty Law Center’s list of extremist hate groups known for anti-LGBTQ speech.

The plaintiffs argue that the painting is a sign that non-black Christians are no longer welcome in the D.C. area. The painting, they claim, is a declaration of Washington D.C.’s preference for Black citizens who practice a secular and humanistic lifestyle. They see this favoritism as a  violation of both the Establishment Clause and the Equal Protection Clause of the Constitution. In response to this lawsuit, Mayor Muriel Bowser and her defense team victoriously argued that the Plaintiffs lacked the ability to bring this suit in the first place, let alone argue it all the way to a win.

The Establishment Clause, found within the First Amendment of the Constitution, generally prohibits Congress from creating laws that establish a religion or prohibit the free exercise of religion. The primary cause of action in this case arose under this Clause, leading the Mayor to argue that Plaintiffs lacked standing for this claim. Standing, in the legal world, can be defined as a party’s ability to prove that they have the right to sue.  The argument over standing in this case was not just based on what would be the proper court to have brought this issue in front of, but whether the plaintiffs were even entitled to bring the issue at all. Plaintiffs in this case asserted their standing for this Complaint under the idea of “taxpayer standing.” That is, they pay taxes in the District of Columbia and that provides the foundation for seeking accountability from the District’s government.

However, as decided by the Supreme Court of the United States in Flast v. Cohen, those attempting to establish standing based on their position as taxpayers must meet two requirements. First, as enumerated in the decision itself, the unconstitutional action being complained about must be, “an exercise of congressional power under the taxing and spending clause of Art. I, §8, of the Constitution.” The second requirement is that the taxpayers must, “establish a nexus between that [taxpayer] statue and the precise nature of the constitutional infringement alleged.” Given these two requirements, Mayor Bowser aptly argued that Plaintiffs would not be able to establish the requisite standing for their complaint under the Establishment Clause. The rule clearly states that an exercise of congressional power is required for the Court to find that a plaintiff has standing. This painting of the street in Washington D.C. by municipal employees was in no way an exercise of congressional power.

The leaders of the Warriors of Christ argued in the alternative that their claim under the Establishment Clause could stand on the “offended observer theory.” This cannot be true. Mayor Bowser, the Supreme Court of the United States, and the Washington D.C. Circuit Court all agreed that there is no legal basis in this theory. Further, making an argument for standing under this theory was unwise for these religious zealots who stand opposed to the BLM movement, as many BLM activists have shown public outrage at the continued presence of racist anti-BLM installments across the country such as Confederate war “hero” statutes and memorials that remain standing. If the religious community in this case was successful in their argument for standing under this theory, it would have set a precedent that would allow the BLM movement to bring suit against offensive public works like those previously mentioned since they too were “offended observers.”

The Equal Protection Clause of the 14th Amendment to the Constitution ensures, in pertinent part, that, “[n]o state shall make or enforce any law which shall abridge the privileges or immunities of citizens of the United States […] nor deny to any person within its jurisdiction the equal protection of the laws.” These self-proclaimed religious “warriors”, in their complaint, argued that the BLM Mural is so offensive to them that it makes them feel as though they are “second class citizens,” because of the impression of favoritism it portrays toward the Black community. While such feelings may be valid in in other circumstances, the Supreme Court historically holds that a party cannot base their standing for an Equal Protection Clause challenge on injury caused by being offended by racial discrimination.

The Court makes a distinction between discriminatory messaging and being personally subjected to discriminatory treatment. This was established in Moore v. Bryant, a case in which an African American lawyer sought an Equal Protection challenge to the Mississippi state flag because of its incorporation of the Confederate flag. The religious zealots in this case are now suffering the same fate forced upon Mr. Moore. Their allegation that the BLM Mural is threatening and offensive might be a result of discriminatory messaging but, until there is a showing that Mayor Bowser or the city of Washington D.C. has engaged in discriminatory behavior, there is no standing for Plaintiff’s Equal Protection Clause challenge to the BLM Mural.

Mayor Muriel Bowser did not stop at the painting of 16th street. Even in the face of backlash, she was successful in changing the name of the two-block-long pedestrian area surrounding the “Black Lives Matter” mural to “Black Lives Matter” Plaza. Depending on who you ask, the name may be seen as performative, it may be considered offensive, or anywhere in between, but one thing is certain so far: Mayor Bowser is not going to back down from her fight for Black Lives Matter.

As for the religious extremists who tried to make the mural go away, they will have to continue to live in a world where people who do not look, think, or act like them enjoy the same rights they do, even if it offends them.