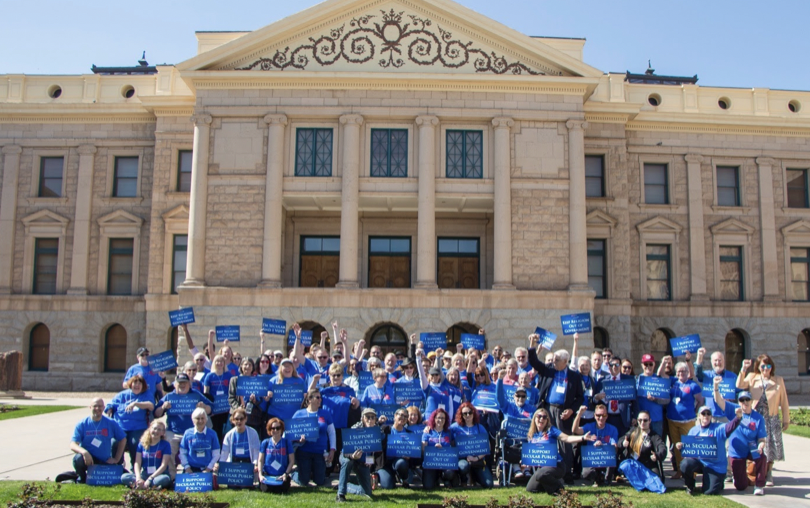 Here we are, yet again, at the end of another year. And what a year it’s been!

As we have since our founding in 2010, Secular AZ spent 2022 fighting to keep undue religious influence out of Arizona’s legislative processes, public policies, and laws — a fight that was both more crucial and more difficult than ever before.

Please click here to learn more about all that we accomplished in 2022… thanks to your support!

For years, we’ve been ringing alarm bells about the ever-increasing threat that Christian nationalism poses. This year, we saw this insidious movement — which is based on the idea that the U.S. should be a theocracy ruled by leaders who practice a single interpretation of Christianity (a.k.a. christofascism) — gain in strength. The movement has strong ties to white supremacy and anti-LGBTQ bigotry, relies on disinformation to gain influence, seeks to undermine and privatize public education, and is misogynist to the core. It’s also a well-funded, well-organized attempt to influence legislation at federal, state and local levels.

In 2022, more christofascist bills came through the AZ legislature than ever before. A flag tied directly to white Christian nationalism was displayed inside the AZ Capitol for months. Candidates who subscribe to hateful and twisted worldviews, often based on conspiracy theories, ran for leadership positions across the state. Trans youth were targeted by cruel policies. And lawmakers cheered as everyone with a uterus lost their bodily autonomy.

For more details on all we accomplished in 2022, please click here.

As we look ahead to 2023 and the upcoming legislative session, we’re focusing on the priorities most important to our supporters, including education, discrimination, reproductive rights, healthcare, and more.

We can’t do it without you… and we thank you for standing with us as we continue to fight to (re)separate church and state in Arizona.